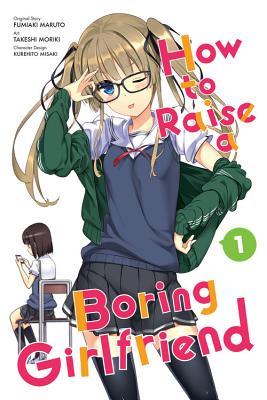 ‘How to Raise a Boring Girlfriend’ by Fumiaki Maruto, Takeshi Moriki (Visual Art), Kurehito Misaki (Visual Art), is about a man who sees and has a picturesque moment with a young lady and decides he wants to build a video game around her, but she turns out to be such a dull kind of person that he begins to question whether this will go the distance.

I got this manga purely because of the title. I wanted to know if what I was thinking in my head, all the horrible  and bad things I was thinking, would be in this and then it turned into something else entirely.

I give this series points for not being what it could have been. We all have thoughts about that title right? By the third and fourth book that young lady who is supposed to be a main character is truly a background character and is that supposed to be irony? I rarely take mangas as one book kind of thing, the whole series or half is what I write about. However in this case it would seem better to only write about 1-3 since 4 and 5 I began to skip through finding the major plot points. I don’t like to disrespect stories like this, but this was just too little focused on the main points and talking to in depth about things that weren’t moving things along. I won’t be coming back to this story, no matter what the cliffhanger was. A lot of time the story pushed me to keep reading simply because of the cliffhangers. They were the only reasons I picked up 3-5 at the library.

The premise is good, I like the characters, but the way the supposed main character is treated and then the way she is treated like a background character simply does not connect me well to the story.

So…I guess this is goodbye….