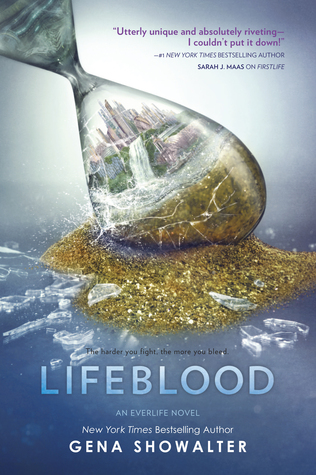 SPOILERS if you haven’t read the first one!!

This past week I was able to read the second of a fantastic series! I so thoroughly enjoyed this book and am so mad that I didn’t find it 2 years from now when all three were out at one time.

Lifeblood by Gena Showalter follows a young woman who has just entered the afterlife. She had been fighting back and forth between the two sides that wanted her and finally chose the side that was more about living righteously as opposed to just for yourself.

Of course…she lost her best friend in the process, who died, but she also lost her love who already was part of the living for yourself group.

This book made me cry at a minimum of 5 separate times.

So many people died! It was like watching Game of Thrones! But that wasn’t the only reason I cried, though that hurt too. It’s the story itself…the message if you like.

The plot itself is just watching the young woman, Ten, walk into who she is supposed to be, using her talents and abilities for her people, family and friends. Unlocking a few mysteries, trusting her love, the usual things.

But that is where the story has a slightly different edge. Usually it takes forever for the silly little girl to act smart, walk wise and listen to the people around her. She can cause people to die in the process and usually even if though it is said it isn’t her fault, there is still a large portion of things that she should be held accountable for. She becomes so wrapped up in a false or small love that when it fails her, no one is surprised.

In this story, she wizens up fast, she takes in her training, she listens to her advisors after a short time, she trusts in a good man and is ultimately brought up higher because of that trust. She does focus a lot on him, but she also begins to focus on the people in her immediate circle and even the people of her realm. When a large point comes to do the wrong thing, she chooses the right thing, and ends up saving her people from worst problems when in most stories she would just be left with guilt because she chose the boy or her one family member instead of the good of her people.

Yet what made the book so impressive was the love. As a Christian I am to love my God, myself, my brother, my neighbor, the widow, the foreigner and the orphaned and even my enemy. When you look at that list in full terms…that covers everyone.

No matter how much Christians will deny it. It covers EVERYONE. I will leave that open to interpretation as it has been for centuries already. Our own preconceptions are all that clouds us from the truth of this statement.

Ten spends the book trying to convince people that if they are going to say that they believe in this righteous way, than loving the other side, even though they want to live differently, is what they have to do. Darkness and light may not be able to occupy the same space, but does that mean that they must war with each other? Kill one another?

The way she talked and lived, made me relook the way that I myself love.

I’m not doing the best that I can, nor in my way.

Just because everyone says that a few ways are the way that I am to live and stand both as a human and a Christian…doesn’t make it correct for me.

The Holy Spirit has been ministering to my soul on this for years, but I haven’t been listening…I will be reading this book again as well as the series at some point in my life, later on.

I look forward to the second for both a fun, amazing plot, but also for the personal growth I expect to blossom inside.