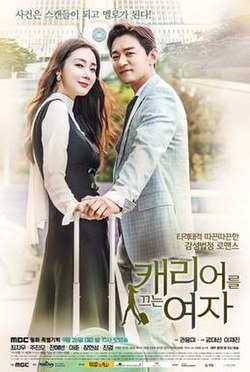 Viki.com has the whole series available if you want to watch and they have several languages…even the Netherlands. 🙂

This story is about a paralegal who is AMAZING at her job. She can look at a case and tell a person if she can get them a not-guilty and if not how much prison time they will get. Then she works with the person’s attorneys to get that answer.

She’s not a good test taker so she’s failed the bar 5 times because of stress. It happens.

She meets with this CEO who used to be a prosecutor but is now over a gossip site and is secretly trying to catch a serial killer. She ends up in jail because of this killer but later starts up a firm with the CEO…based on certain silly conditions.

So now that the plot has been said, first off: I CAN’T STAND THE SISTER!!! I want to send her to some nation that doesn’t include her in the show. I just…she’s so short sided and mean and vicious. When other people aren’t being vicious but looking out for her she can only see her way of doing things. On top of this she has no real understanding of men and is so naïve and yet calculating that she just appears young and stupid. Not that those two terms are mutually exclusive!

I really like the main character, however. She is very sweet but not at all naïve and very on her game. She goes to head to head with the CEO so many times and wins. He is not used to losing so he pouts quite a lot, but also swings back as an equal. (This is in gaming terms of social or business interaction and not at all physical.) Their back and forth is something I would like to have for myself. Getting a person to get past their ego and just have fun winning and losing with each other is not something that can be found with ease especially if the person isn’t exactly an equal in the same field. Jousting over lawsuits with a biblical major is not exactly fun.

There is a lot of underhanded things going on in the show but I like that it is about justice in the show and not simply about winning the case for the client. Several times the main character has to tell another person that they are missing a point. One case it was about healing the person’s ego who had been gossiped about and maligned. The MC bolstered the woman and told her that she did good, in her own words of course.

I am currently at episode 5 and I really like the main character. She is of course the kind of character I like most because she is the kind of person I want to be most. Resourceful, able and a sense of humor that makes her resourcefulness just awesome. The way she handles the CEO in the first episode? All kinds of priceless.

That’s all I can say for now since I haven’t watched he fullness but really they got some great actors to do this. I’m really rooting for her and the CEO and not Attorney Ma tho. 🙂